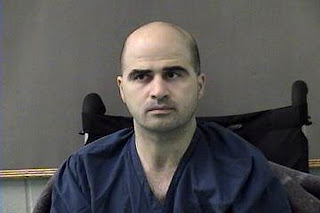 Anyone doubt for a moment that the Judge won't determine that the evidence is sufficient to warrant a finding that Major Hasan should be court-martialed?

FORT HOOD — Prosecutors took nine days and 56 witnesses to finish their part of an evidentiary hearing for an Army psychiatrist charged with a shooting spree one year ago, but the defense took just four minutes.

The hearing wrapped up Monday morning shortly after Col. James Pohl, an Army judge who presided over a series of Abu Ghraib proceedings five years ago, asked Maj. Nidal Malik Hasan if he had anything to say.