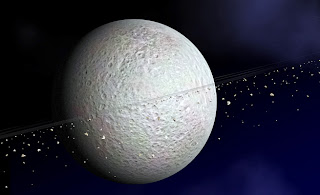 Well, this is just an amazing find.

Not quite up there with discovering life, not quite that, but amazing nevertheless.

A team led by San Antonio scientists has discovered a thin atmosphere of oxygen and carbon dioxide on Rhea, Saturn's second-largest moon, they reported Thursday.

Not that anything could live there. The density of oxygen in Earth's atmosphere is 5 trillion times greater than on Rhea, which essentially is a big ball of ice.

But the latest findings from the Cassini space probe, published online Thursday in the journal Science, suggest similar atmospheres could be more common in space than was thought, said the paper's lead author, Ben Teolis.