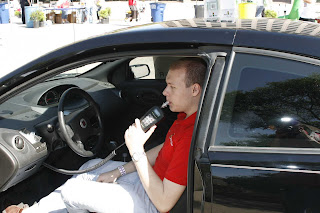 This seems to be pretty silly to me.  I've got to believe that Judge Saxon's decision did not solely rest on the distinction between a colon or a period.

I would not have revoked his probation not because of a punctuation error but because he was apparently driving the vehicle at the behest of the Sheriff's Department.

He was in jail awaiting transfer to a substance abuse facility.  If there is any blame put it on the Sheriff's Dept.

FLORESVILLE — Sometimes, justice boils down to the details. In this case, it came down to punctuation.

That's what Bobby Frazier learned Friday, as he waited for state district Judge Stella Saxon to decide whether or not to revoke his probation, after prosecutors said he violated it last month while in the custody of the sheriff's department at the county jail.

When Saxon put him on shock probation Sept. 29, she had revoked his driver's license and ordered that he not operate a vehicle that was not equipped with an interlock ignition device, a type of breathalyzer that detects alcohol.