Gimme the doughnut or ...or..I'll stab myself! 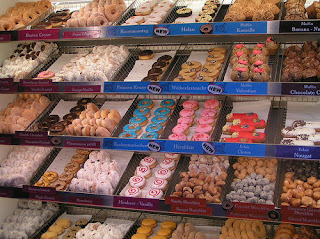 The hapless robber of the year award goes to:

VANCOUVER (NEWS1130) - He must have really needed a doughnut fix.

Police have arrested a man who stabbed himself while apparently trying to rob a Duffins Donuts store.

Officers were called around 2 a.m., when they found a man so drunk, he was slumped over on the floor. So, even if he had robbed the place, he probably wouldn't have made it far.

When the cops were putting him in cuffs, they discovered a big butcher knife and a stab wound on the guy's gut. Police think he fell on it at some point during his drunken stupor.

They took him to the hospital, then quickly hauled him over to the VPD cells. He's now facing a robbery charge.
Posted by Sam at 9:01 AM