To young to die 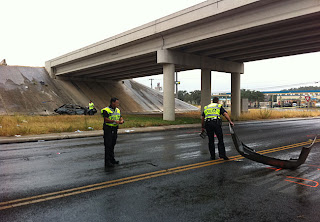 A mile and a half from my house.  A car accident possibly involving intoxication by someone underage.

One woman loses her life, too young.  My condolences to her family and may she Rest in Peace.

One man whose life is potentially ruined as he faces Intoxication manslaughter charges of two to twenty years in the penitentiary.

Hardly makes the drinks worth while, hmm?

A woman was killed early Sunday morning in a fiery one-car crash on the city's North Side that San Antonio police blame on an alleged intoxicated driver and excessive speed.

Kimberly Villasenor, 20, was a passenger in a sedan that veered into the grassy median and then flew off an overpass on eastbound Loop 1604 around 5 a.m.

Police Sgt. Jim Perdue said the car landed about 17 feet below, on Stone Oak Parkway, ejecting both occupants. The car then burst into flames, bounced up a concrete embankment and then landed on top of the female passenger, according to police.