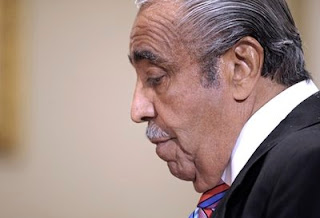 And yet I am sure there will be nothing but a slap on the wrist for the Congressman.


House ethics panel convicts Rep. Rangel on 11 of 13 counts of rule violations
By Susan Crabtree and Jordan Fabian - The Hill

Rep. Charles Rangel (D-N.Y.), once one of the most powerful members of the House, was convicted Tuesday on 11 counts of violating ethics rules and now faces punishment.

"We have tried to act with fairness, led only by the facts and the law," Lofgren said. "We believe we have accomplished that mission."