Uhh, I don't know where it came from? 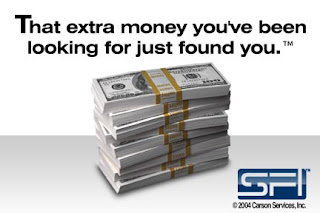 I guess it beats putting the money in a freezer.

Prince George's County Executive Jack Johnson, arrested in a corruption probe Friday, told his wife to hide tens of thousands of dollars in her underwear as federal agents arrived at his house to search for illegal payoffs from a developer, federal prosecutors have charged.

Caught in an FBI sting taking a $15,000 payment from an unnamed developer Friday, Mr. Johnson later told his wife by telephone not to answer the door when two FBI agents came to their home, authorities said.

The county executive, a Democrat who was previously the county's top prosecutor, then told his wife, Leslie Johnson, to tear up a $100,000 check from the developer and stash tens of thousands of dollars in cash in her bra, authorities said in charging documents.