Too stupid to judge? 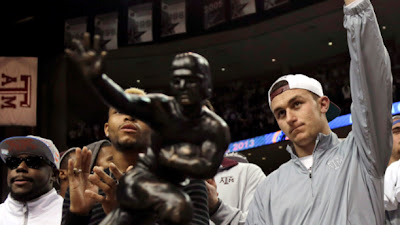 What an assclown of a judge.

Heisman Trophy winner was stopped for speeding south of Dallas

Heisman Trophy winner Johnny Manziel may have outrun the Oklahoma football team's defense in epic fashion earlier this month, but the Texas A&M quarterback cannot outrun the long arm of the law.

Police in the suburban Dallas city of Ennis issued Manziel a speeding ticket last week. While the infraction was ordinary, a local judge found himself in some hot water after posting about his defendant on his personal Facebook account.

"Too funny," Judge W. Lee Johnson wrote. "So it seems that a certain unnamed (very) recent Heisman Trophy winner from a certain unnamed "college" down south of here got a gift from the Ennis P.D. while he was speeding on the 287 bypass yesterday."