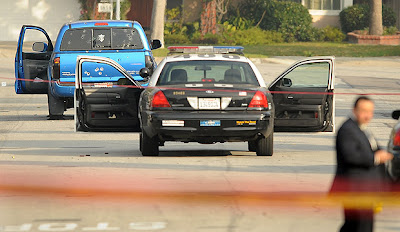 I understand tensions are high but this?  Really?

For God's sake!  They were out delivering fricking newspapers in a similar car to the one that the rogue former cop owns, and by the looks of it one that is pretty common.

God help you if you're driving a blue Dodge pick-up truck, apparently.

Two women who were shot by Los Angeles police in Torrance early Thursday during a massive manhunt for an ex-LAPD officer were delivering newspapers, sources said.

The women, shot in the 19500 block of Redbeam Avenue, were taken to area hospitals, Torrance police Lt. Devin Chase said. They were not identified. One was shot in the hand and the other in the back, according to Jesse Escochea, who captured video of the victims being treated.
It was not immediately known what newspapers the women were delivering. After the shooting, the blue pickup was riddled with bullet holes and what appeared to be newspapers lay in the street alongside.