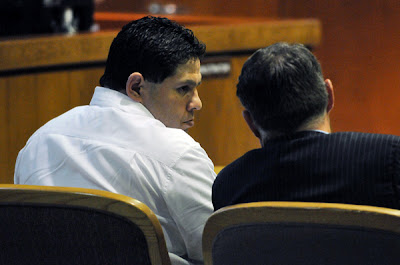 Jury sentences Albert medellin to 99 years in prison for murder and 50 years for aggravated assault with a deadly weapon.

Thank you Jenny Smith and Laura Bates for your hard work.

I am very glad for his poor victim that Mr. Medillin was found guilty for the assault and murder of Antonia Espinoza.

Perhaps now she can rest in peace.

A Comal County jury made up of seven women and five men barely had time to catch their breath Wednesday after convicting a New Braunfels man of assaulting and killing his fiancée before hearing testimony in the penalty phase of the case.

They returned Wednesday morning for more discussions and appeared deadlocked that morning when they sent District Judge Jack Robison a note asking what they should do if they agreed unanimously on one charge but could come to no consensus on the second.