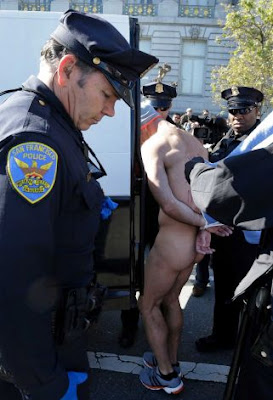 SAN FRANCISCO (AP) — Four protesters were arrested entirely in the buff as they took to the steps of San Francisco City Hall in a brazen challenge of the city's ban on public nudity on Friday, the first day it went into effect.

One woman and three men — one wearing just a mesh thong — were taken into custody as about a dozen other protesters in various states of undress paraded around with painted slogans on their bodies, holding up signs with messages such as "The Human Body is Beautiful."

Police gave them a 15-minute warning to disperse or put pants on before officers arrested those who failed to cover themselves. The protesters said their arrest would advance the cause of "body freedom."