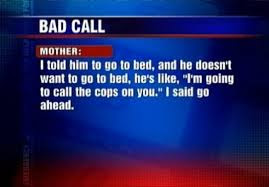 Gee, how'd you like to be this kid's parent?

BROCKTON, Mass. (AP) — Police in Massachusetts say a 10-year-old boy called 911 because he didn't want to go to bed.

Brockton police say the boy made the emergency call just after 8 p.m. Wednesday and told the dispatcher he was calling to report his mother because he did not want to go to bed.

There was no emergency.

The Enterprise reports that according to the police log, an officer went to the boy's home and explained to him when it's appropriate — and when it's not — to call 911.