They're waiting for you 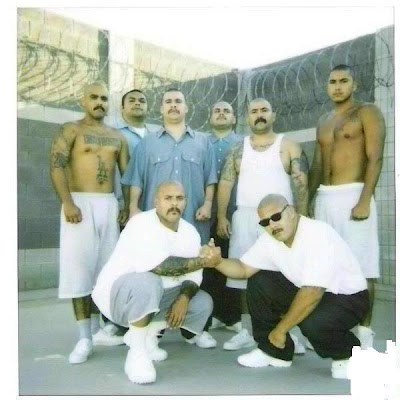 He'll probably need "protection" in whichever prison he gets sent to.

But you go kill a member of the Mexican mafia and get sent to a prison and see how long you'll last.

A man who fatally stabbed a Mexican Mafia gang member during a confrontation at a Halloween party three years ago was sentenced Monday to 18 years in prison for murder.

Juan Lucio, 37, acknowledged to police in October 2009 that he swung a knife at Edward “Toons” Buentello, 29, as he was leaving the Northwest Side party at about 2:15 a.m. But he swung in self defense after he was hit in the back of the head with a bottle, he insisted to police and again in court Monday.

Lucio reached a plea agreement in November for a maximum possible sentence of 25 years in prison. His attorneys asked state District Judge Ron Rangel on Monday for a five-year term, suggesting that gang members have paid unwanted visits to some of the witnesses in the case.