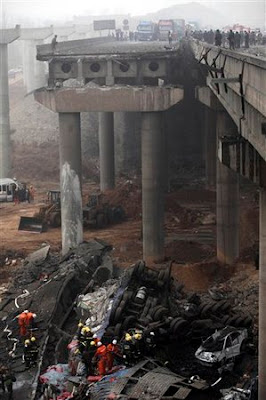 I guess this would be the Year of the Fiery Dragon?

Man, just how much fireworks went off anyway?

BEIJING (AP) - A truckload of fireworks intended for Lunar New Year celebrations went off Friday in a massive, deadly explosion that destroyed part of an elevated highway in central China, sending vehicles plummeting 30 meters (about 100 feet) to the ground.

Earlier reports by China National Radio and some other outlets of 26 people killed were later removed from websites, without explanation.