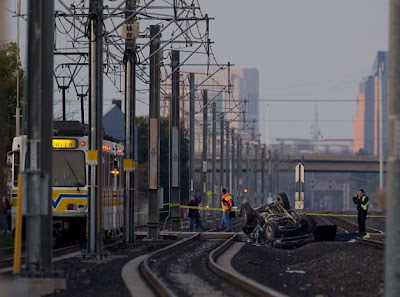 Oh, and of course, the (allegedly) drunk guy responsible for the mishap survived while his two passengers died.

A woman who was killed when the car she was riding in plunged off an overpass and into the path of an oncoming train has been identified.

April Gonzalez, 26, was pronounced dead at the scene; the driver, Rosalio Roman Padilla, was driving the car southbound along Cupples Road when he lost control, hit the median and swerved off a bridge near General Hudnell Drive, police said.

The car landed upside down on the railroad tracks below and was hit by an eastbound train.