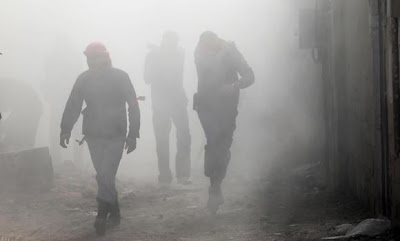 BTW what does NGO stand for?  None got out?

BEIRUT: A suicide bomber on Wednesday attacked a military intelligence headquarters in the south-central Syria city of Palmyra, killing and wounding an unknown number of people, the Syrian Observatory for Human Rights said.

“A powerful explosion rocked Palmyra this morning and according to initial reports it was a suicide attack targeting the building housing the military intelligence and state security” offices, said the Observatory, which gathers reports from activists, medics and lawyers across Syria.

The watchdog could not immediately give a more detailed breakdown of the toll of dead and wounded.