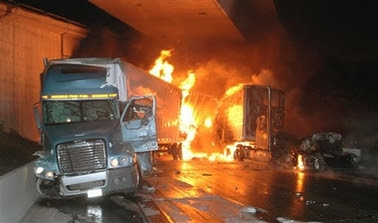 This is getting pretty tedious.

A 23-year-old man is in the hospital facing a driving while intoxicated charge after police said he drove the wrong way on Interstate 35 early Saturday and struck an 18-wheeler.

Officer Matthew Porter, spokesman for San Antonio police, said an off-duty officer called dispatch about 3:15 a.m. and reported a car driving south in the northbound lanes of the interstate near Walzem Road.

Porter said the driver of the car struck an 18-wheeler driven by Abditfatah Jodah, also 23, and injured his passenger, Bashi Awale, 29.