I thought Popes were supposed be 'Humble'? 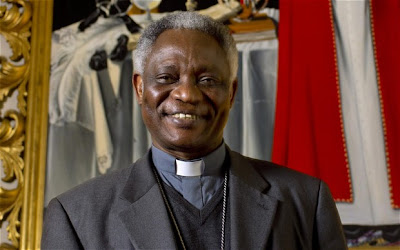 I don't remember anyone "actively" being interviewed or semi-campaigning to be elected Pope.

The cardinal who could become the first black pope said Tuesday that the Roman Catholic Church faces grave challenges in remaining relevant in the modern world even as he laid out a conservative vision of how to deal with society's "alternative lifestyles".

By Malcolm Moore - The Telegraph

He told The Daily Telegraph Tuesday that his biggest challenge, should he be elected, would be to maintain an orthodox Catholic doctrine while "at the same time knowing how to apply it so that you do not become irrelevant in a world that has continuous changes".

Cardinal Turkson, who holds one of the most important jobs in the Roman Curia and has been repeatedly promoted by Pope Benedict, was quick to take a conservative line on gay marriage and other "alternative lifestyles".

"We need to find ways of dealing with the challenges coming up from society and culture," he said, adding that the Church needed to "evangelise", or convert, those who had embraced "alternative lifestyles, trends or gender issues". He added: "We cannot fail in our task of providing guidance."