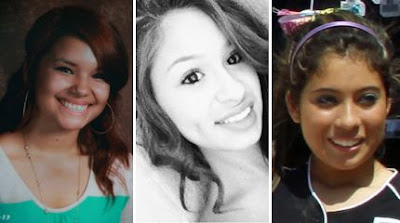 And just again this morning we had a report of two more young women who died when they went off the road and their car fell 40 feet to the highway below.

Consider this to be a Public Service Announcement of sorts.

Andrea Reyna had just gotten her first car and was showing it off to her boyfriend when she realized she missed her 10:30 p.m. curfew.

She jumped in the car and called her mom to say she'd be a few minutes late, but never made it home Wednesday night.

Reyna was not wearing a seatbelt when she lost control of her speeding 2008 Hyundai Accent in the 11500 block of Crosswinds Way about 11 p.m., and she was ejected as the car struck a culvert and went flipping off the road.