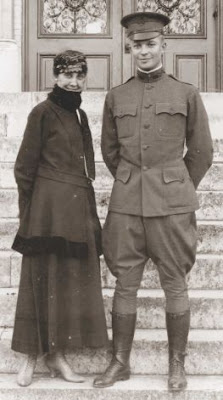 Its a fascinating history.

<====== A second lieutenant fresh out of West Point, Dwight Eisenhower was stationed in 1915 at Fort Sam Houston, where he met Mamie Dowd and courted her with Mexican dinners on San Antonio's West side and dancing on the roof of the St. Anthony Hotel.
Photo: Courtesy Arcadia Publishing

Did you know that in 1912 a group called the Alamo Heroes Monument Association had plans drawn up for a soaring 802-foot monument the size of the Eiffel Tower that would have dwarfed every building around it, including the one it was meant to memorialize? (Funding fell through.) Or that Sunken Garden is sunken because it was once the site of a cement company's quarry? Or that San Pedro Park is second only to Boston Common as the oldest park in the country? Quick, what was the first restaurant on our River Walk? That would be Casa Río, founded in 1946.

The authors have a book-signing from 11 a.m. to 1 p.m. Saturday at the Twig Book Shop at Pearl Brewery.