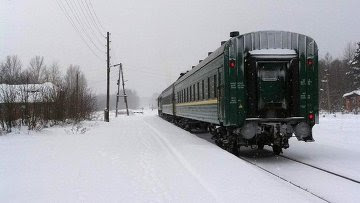 Wow, that would pretty much suck.

Chasing a train, in a t-shirt, sweatpants and slippers in -40 Celsius temperatures?

That is one pretty tough Ruskki, man!


Man falls out of train in Siberia, chases it for 7 km

A man fell out of a moving train in Siberia and had to run after it for seven kilometers in -40 Celsius.

A resident of Bratsk, 42, went to the bathroom for a cigarette, but instead of returning to the carriage, he opened the wrong door and fell outside.

The passenger did not despair and set off running after the train in extremely freezing temperatures. He kept chasing the train wearing a t-shirt, sweats and slippers for seven kilometers, the regional transport police department announced.