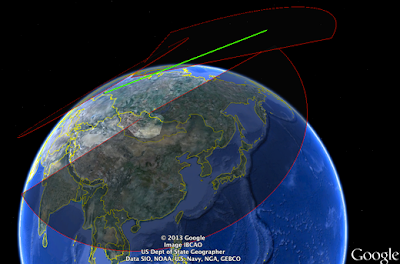 A big thing to miss, surely.

But as the article points out you have to be looking for this kind of stuff in the first place in order to detect it.

If you are coming from the Drudge Report, please note that the headline there is a bit misleading. Russian radars didn't really "fail" to see the meteorite - I don't think you could fail in something that you had no intention of doing.
Traffic is a bit heavier than usual today, so this page is a light version of the original entry.

Image of radar fans and the meteorite trajectory

The meteorite that exploded over Chelyabinsk on February 15, 2013, was a pretty big thing - NASA estimated that it was about 15-17 meters in size and weighed 7-10 thousand tonnes. Surely it should have been detected by someone. Quite a few commentators in Russia indeed asked why the country needs all these early-warning radars if they could not detect something that large and threatening - it's worth keeping in mind that the explosion that accompanied disintegration of the meteorite was equivalent to about 500 kt.

As far as I can tell, the early-warning radars never had a chance, but it wasn't their fault - the problem was that they were never supposed to detect objects that are coming from outer space. The picture above shows the estimated trajectory of the meteorite and fans of the Daryal radar in Pechora and Dnepr in Mishelevka. The fan of the Don-2N radar of the Moscow missile defense system can be seen as well (for other radars, see this post). It's better to see this in Goolge Earth - here is the kmz file.

I assumed for simplicity that the meteorite flew along a straight line - that's not quite correct, but should work for the purposes of this analysis. The AGI simulation of the trajectory based on the Meteosat-9 data shows that the meteorite came from the azimuth of about 60 degrees (they got the meteorite path wrong, in fact - it passed to the south of Chelyabinsk, not to the north). A different estimate suggests that the azimuth could be about 100 degrees, but that doesn't matter much in the end. The re-entry angle is taken to be about 15 degrees - this is what various photos show.