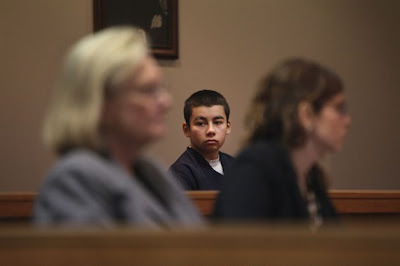 Not so innocent and nice.

A 16-year-old accused of kicking in a bathroom door and using a baseball bat to bludgeon to death a woman who helped raise him will stand trial on a murder charge as an adult, a juvenile court judge decided Friday.

Isaac Nathaniel Rodriguez refused to give an official statement to investigators after he was taken into custody Sept. 12 — minutes after the body of Adriana Carrillo Terry, 63, was found inside her Northeast Side home, where he also lived.

But Rodriguez twice told officers, “I did it,” during “unemotional” conversations that were not recorded, homicide Detective Rich Richardson told state District Judge Carmen Kelsey during the hearing.