Give him life or 99 years 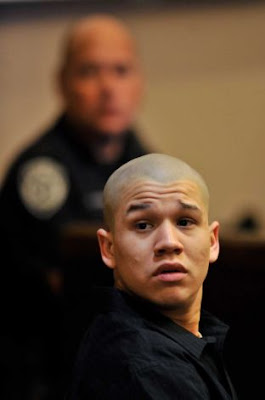 Just another two-bit punk wanting something that someone else had.

A San Antonian whose capital murder charge was reduced because of his age was found guilty by a jury Friday of first-degree murder in a fatal carjacking attempt five years ago.

Aaron Alaniz, now 21, was 16 in August 2007, when prosecutors said he shot Vicente Alvarez Huerta — a stranger who was driving home in his prized Ford Expedition from a day of work at Santa Maria Mexican Restaurant, his family's business.

The defendant has opted to have state District Judge Angus McGinty determine his sentence early next year instead of a jury. He faces up to life in prison, with the possibility of parole after either half the sentence is served or 30 years.