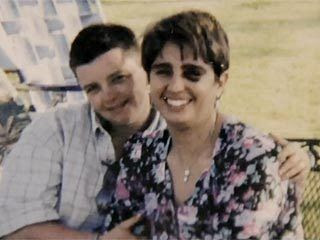 When I heard about Elizabeth Rudavsky--a Canadian woman who murdered her husband, Angelo Heddington, after enduring his horrible abuse, only to find out after his death that he was actually a woman--I honestly couldn't believe it. I had never ever heard something so bizarre. I mean, Heddington had not only hidden his true identity for months, he created a true hell for Rudavsky, by mentally and physically abusing her, even before they were even married.

Honestly, when I found out more about this couple and saw the images that documented their destructive relationship, I couldn't help but wonder HOW IN THE WORLD Rudavsky never realized that her husband was actually a woman? Not just during their intimate moments, but because of her very obvious femenine traits? How could she marry someone who mistreated her and abused her from the onset of their relationship? How could she smile in a picture that clearly shows a black eye, while her husband is embracing her? So many questions, I know, but I just honestly can't understand how someone can agree to enter in to and stay in such aterrible relationship...

According to Rudavsky, she never realized that her then-husband was a woman because Heddington had told her in the very beginning of the relationship that an old girlfriend had burned his (her?) genitals, which is why they always had sex in complete darkness and she never saw her husband naked. Worst of all, she would have probably never known the truth if paramedics hadn't found the prosthetic penis that Heddington used, while they were taking him to the hospital the night in 2003 after he was stabbed in self-defense by his wife.