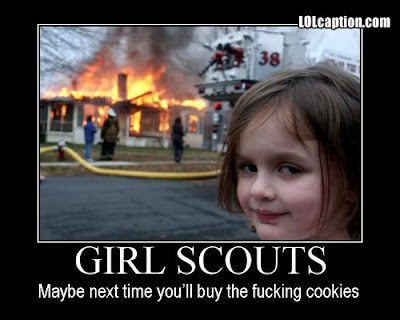 Man, don't be 'effing with the Girl Scouts, dude!

They'll mess you up!

A proposed street name change on the North Side may pit the Girl Scouts against a part of Texas history.

The Girl Scouts of Southwest Texas, which moved into its Sally Cheever Girl Scout Leadership Center at 811 N. Coker Loop in 2007, wants to change the name of the street to Trefoil Lane, in honor of the 100th anniversary of the Girl Scouts. But the proposal, set for a public hearing today of the city's Planning Commission, is drawing concern from preservationists.

“You can go on and on about the history that happened there,” said Carl Coker, whose great-great-great grandfather, Joseph Coker, helped settle the area.