Have you seen him? 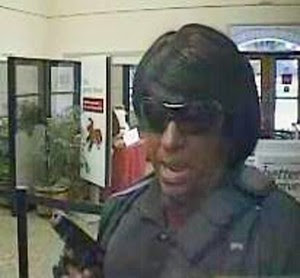 Please call the police or sheriff's department if you have any information.


New Braunfels police continue to investigate and ask that anyone with information on the alleged robber’s identity contact Det. David Schroeder at (830) 221-4100 or dschroeder@nbtexas.org.

Police ask that anyone with information about either robbery, but who wishes to remain anonymous, contact Crime Stoppers of Comal County. Anonymous tips can be called in at (830) 620-TIPS (8477) or (800) 640-8422, sent via text message by texting the word “Comal” plus the tip to CRIMES (274637), or submitted online at comalcrimestoppers.org.

NEW BRAUNFELS — Police said a man dressed in drag that is suspected of robbing several financial institutions across the state in recent weeks held up a bank Thursday morning in New Braunfels.

“Nobody was hurt,” he said. “It’s the same person as from Security Service.”