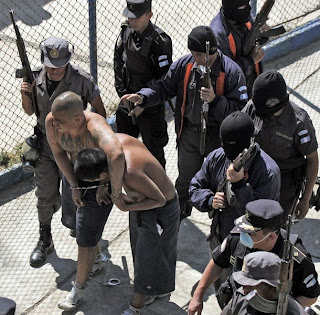 I can't think of a more serious and dangerous situation than this.

Folks who feel they have nothing to lose, rioting.

I hope it gets contained soon.

PECOS (AP) — Law-enforcement authorities worked Sunday to restore order at a privately run federal prison in West Texas, where a riot broke out a day earlier.

Texas Department of Public Safety spokeswoman Tela Mange said inmates were in the prison yard at one of the units that make up the Reeves County Detention Center.

The riot is the second in less than two months at the facility, which includes three units. The first was at the prison's No. 3 unit. Saturday's disturbance was at the center where units No. 1 and No. 2 are housed.

Officers from various agencies, including the DPS, remained on the scene Sunday

Officials at the prison could not be reached for comment. Calls to the GEO Group, which runs the lockup, were not immediately returned.

Matt Guerra, who works at Unit No. 3, said Saturday night that he could see smoke coming from the area of the riot.

The GEO Group, based in Boca Raton, Fla., has run the lockup through contracts with Reeves County and the Federal Bureau of Prisons since 2003. The prison holds more than 2,400 inmates.