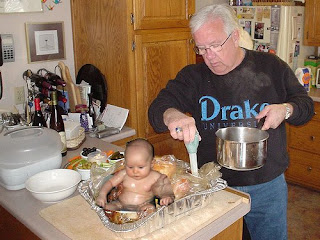 I used to live in Hamtramck back when Man o' Law first got married and when I went to undergraduate school in the early 70's. It was a quiet little enclave city surrounded by the city of Detroit.

Girl tells police 'Mom cooks me in the oven'

HAMTRAMCK -- The license plate in the window of the family Cadillac reads "Best Dad." But a 4-year-old girl told police Mom wasn't nearly so kind.

"Mom cooks me like a turkey in the oven," she told police.

Hamtramck cops stumbled onto the graphic allegations of burnings, beatings and torture after the girl's mother phoned police Jan. 23 and confessed to "harming her children," Detective Ben Bielecki said Thursday.

The allegations belied outside appearances of a happy family, shocking neighbors of the family whose front picture window is adorned with the sign "1 God."

"They were new to the neighborhood," said Deandre Martin, 28, who lives next door to the white, two-story home near Holbrook. "I didn't realize what was going on. It's horrific. I'm just happy the kids are alive."

Reyna Valentino, 40, a mother of five, faces life in prison on allegations that she burned her 4-year-old daughter in an oven, used a hot nail or screwdriver to singe her eyelids and beat her 5-year-old daughter's leg with a pry bar.

She was arraigned Wednesday on felony charges of first-degree child abuse and torture in 31st District Court.

"She said, 'Her heart is hurt and broke because momma doesn't love me anymore,' " Bielecki read from the report.

Police said Valentino's husband, Randy, wasn't home and there's no evidence that he abused their children.

After the incident, Valentino called police about 3 p.m. to come get her.

"She said she is harming her family," Bielecki said. "It's extreme. It's an awful thing that's happened. I just hope she doesn't get custody of the kids -- ever."

The couple has three other children, two boys believed to be 7 and 8 years old and an infant who is about 8 months, Bielecki said.

All five children are in foster care and doing well, he said. Martin said police removed them from the house about a week ago.

Martin said the family moved in during the fall. He never saw Valentino but said her children were always smiling, laughing and seemingly healthy.

Valentino spent more than a week undergoing a psychiatric evaluation at Detroit Receiving Hospital after the incident.

Valentino will have a court-appointed lawyer next week, court officials said.