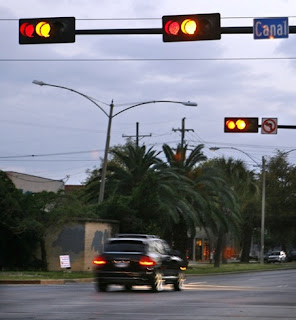 Give him credit for his honesty.
Why did you run that light? 'Because it was red'
Des Moines Register.com-

Asked why he went through an intersection on a red light, a Des Moines man about to be arrested on a third drunken driving charge, allegedly answered, "Because it was red."

Travis Lyle Williams, a 29-year-old construction worker, went through the intersection of Grand and Second Avenues "without hesitation" on a red light shortly before 2 a.m., on Thursday, police said.

Police said Williams admitted only to having two beers at a downtown tavern. Officers noted he had a "glazed/dazed look to him." A test showed his blood-alcohol level was .215, or well over twice the legal limit.

Williams could not produce a driver's license. Officers said he had only an Iowa ID card.