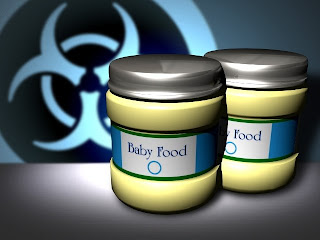 This is just a bizarre and potentially very dangerous situation.

IMHO a bond should've been denied for the safety of the community.

TAMARAC, Fla. (WSVN) -- A Broward County judge denied bond to a woman spotted by a Publix shopper pouring an unspecified black liquid into jars of baby food inside the grocery store on the evening of Feb. 12.

When store employees confronted her, the suspect told them she had been mixing food for her son during the 15-minute event. While being questioned, Ybarra allegedly urinated on herself, prompting her to require a visit to the bathroom in order to clean herself up. Once in the lavatory, Ybarra allegedly placed a pair of rubber gloves in the trash and flushed Pine Glo disinfectant down the toilet.

Store officials confiscated all of the grocery products that were in the suspect's possession and checked its other area supermarkets to determine whether or not Ybarra had visited them.

BSO Detectives sent samples of the ammonia-scented liquid to the Food and Drug Administration's labs in Cincinnati for testing and identification, which is expected to be completed in two to three weeks.

Investigators do not know whom the bottles were intended for, though Ybarra did tell authorities that she is the mother of a 21-year-old who resides in Orlando.

The judge presiding over Ybarra's arraignment proceeding determined that her possession of that alleged chemical gives authorities probable cause to charge her with a first-degree felony of poisoning food or water with intent to kill. The run-in violates conditions of probation Ybarra had been placed on in connection with a 2005 aggravated battery charge. The supposedly unemployed medical worker also holds a 2007 charge for aggravated battery with a deadly weapon.

Under Florida's Baker Act, authorities committed the 50-year-old to a psychiatric facility within BSO's North Broward Bureau jail in Pompano Beach.
Posted by Sam at 7:54 AM