No Boy George, he 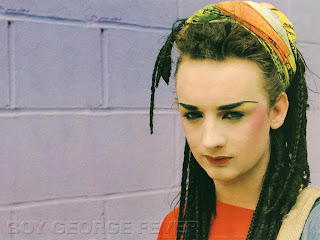 Boy, he's lucky that Dubai is a 'progressive' country.

Across the Persian Gulf in Iran he probably would have been executed.

An Indian national working in Dubai as an administrator with a property development company has been sentenced to a six-month suspended jail term and fined $2,722 for cross-dressing and wearing mascara in public, the Dubai newspaper Gulf News reported.


According to the paper, the man was arrested by a police officer in civilian clothes in the Mall of the Emirates in what the police described as a glittering outfit, a bra, mascara, women's perfume and a wig.

The defendant claims he was cross-dressing as part of his preparation for a small part in an upcoming Bollywood movie, when he received an urgent phone call. He also disputes claims that he tried to bribe the police officer who arrested him, arguing that he simply offered to pay the fine on the spot.

There are approximately 1.2 to 1.3 million Indians currently working in the United Arab Emirates (UAE), according to Indian diaspora groups. While most migrant workers from India, Pakistan and Bangladesh work in what was until recently a booming construction industry, there are also a large number of Indians working as white-collar managers in a variety of private companies in the seven Emirates that make up the UAE.