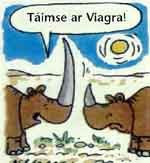 Morale in Mexico City is *ahem* rising, amongst other things.

MEXICO CITY: Flashing a boyish grin, the silver-haired septuagenarian fidgeted nervously. His voice dropped to a whisper. A reddish hue enveloped his face. All this because he was asked how the latest social program to be offered by Mexico City's government was affecting his home life.

He was talking, however obliquely, about the free Viagra the government is giving away to poor men age 60 and above.

With midterm elections looming in July, Mayor Marcelo Ebrard has been rather creative in his attempts to make life more livable for the people of this sprawling metropolis, which finds itself clogged with traffic, overwhelmed by smog, prowled by criminals and reeling from the global financial crisis.

The mayor dumps sand at public pools to create artificial beaches. He bans cars from major roadways on Sundays and turns them into sprawling bike paths. The largest skating rink in the world, one that makes Rockefeller Center's patch of ice look puny, went up in the Zócalo, Mexico City's central square, for the second straight year over the Christmas holidays.

This weekend, for Valentine's Day, the government is sponsoring a mass kiss-in, in an attempt to break the world record and raise awareness about domestic violence. "Bésame Mucho," or "Kiss me a lot," was recently adopted as the city's motto by tourism officials, and Ebrard is expected to preside over the event, though his staff was not sure whether he would be publicly smooching his wife, a former soap opera actress.

But the free Viagra is what had Posadas, a retiree, hemming and hawing on a recent afternoon. After reading an announcement about Ebrard's latest gesture, he summoned the courage to broach the topic of his erectile dysfunction at a local government health center. After undergoing an in-depth health exam and receiving a lecture on the dangers of sexually transmitted diseases, Posadas recently became among the first men in the city to be issued a handful of government-subsidized pills.

Apparently, they worked. "Now, I'm able to fulfill my wife," he said. Posadas, the father of two and grandfather of six, acknowledged that his sex life had slowed somewhat in recent years.

Read the rest here: Viva Viagra!
Posted by Sam at 7:21 AM