Bicycle not built for two? 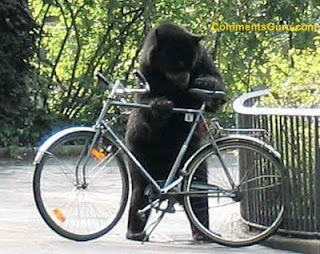 Jesus! How stupid was this?

Just buy him a bike or give him cab fare. Don't 'borrow' a grad student's bike.


USF professor on leave after he is captured taking a bike from campus
Tampabay.com-

TAMPA -- A University of South Florida dean is being investigated after surveillance video captured him taking a red bike from the loading dock of the Johnnie B. Byrd, Sr., Alzheimer's Center and Research Institute.

Dr. Abdul Rao, senior associate vice president for research at USF College of Medicine, said he took the bike on Monday to help a "nearly homeless'' friend and intended no harm.

Video of the theft has been posted on YouTube.

He is on leave while university police and the administration review the matter.

"This issue for us," university spokesman Michael Hoad said, "is the error in judgment."

Rao said in an interview today that he allowed a man who does yardwork for him to take the bike so that he could go to the DMV to replace a lost Florida ID.

"Initially, I was reluctant," Rao said. "But he is trustworthy and he is an extremely hard working guy. He is just one of those guys who can't get off the poverty bubble."

Rao said he did nothing to conceal the fact that he was taking the bike. In fact, he said, he advocated for video surveillance on the dock last year and was aware he was being filmed.

On Wednesday, he said, he was in a meeting when campus police asked him to step out. They questioned him about the bicycle, which belonged to a graduate student. Rao said his friend had already returned the bike by then.

USF police Lt. Meg Ross confirmed the bike had been returned. She said no charges have been filed and the investigation is ongoing.

Rao also released the following statement to his colleagues:

"I will be away from the Alzheimer’s Center for a time and Dr. Cliff Gooch and Mr. John Ekarius will assume responsibility for routine administrative matters. I must, with deep regret, let you know that I made an unfortunate mistake and it is now necessary for the official channels to review the incident.

"Earlier this week I gave a man who does odd jobs for me permission to use a bicycle that was parked at the center. I acted out of compassion for this nearly homeless man; but I failed to consider that the bicycle belonged to someone on our Alzheimer’s team. The bicycle was reported stolen. It has, however, since then been returned to its owner. USF police are investigating as is standard procedure. It was a terrible lapse in judgment on my part; I have no excuse. I can only say that my intention was never to bring harm, alarm, or disruption to anyone.

"Please know that I deeply regret this failure in judgment and the unfortunate attention it has generated. My first duty is to the community of scholars that is USF and to the talented people working across USF Health. If it is possible, I hope to return soon and resume my service to Dr. Klasko and you as we continue to move USF Health forward as a global leader and a respected community partner."