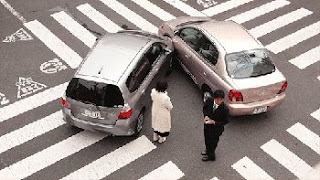 Whose fault was this?

Which sub had the green light and the 'right of way'?

Who is going to sue whom?
By TOM NEWTON DUNN
Defence Editor
and PETER ALLEN-The Sun
BRITAIN and France tried to cover up the nuke subs crash that could have sparked a massive disaster, it emerged last night.

The navies of both nations were forced to come clean about the incident yesterday after The Sun’s exclusive revelation swept the world.

For almost two weeks the Royal Navy had REFUSED to discuss anything about the collision which damaged ballistic missile carrier HMS Vanguard.

Vanguard ... Navy did not discuss the collision

And the French had PRETENDED their sub Le Triomphant hit a container that fell off a ship.

Sir Jonathon, the First Sea Lord, was forced to deny fears that Britain lost its nuclear strike capability during the incident.

He was speaking at a London press conference, arranged to mark 100 years of naval aviation but which was hijacked by questions over the crash.

The Admiral, who at one point sat with his head in his hands, said: “Both submarines remained safe and no injuries occurred.

“We can confirm that the capability remained unaffected and there has been no compromise to nuclear safety.”

He added that HMS Vanguard had returned to the submarine base at Faslane, on the Clyde in Scotland, under her own power.

The boats were carrying as many as 32 nuclear missiles at the time of the mid-Atlantic smash earlier this month.

Each of their multiple warheads has a blast yield of up to 3.8 megatons — eight times as powerful as the atom bomb dropped on Hiroshima in 1945.

Both subs were on top-secret “silent” patrols and when in stealth mode they move as slowly as 1mph to make them impossible to detect.

Last night MPs from all parties demanded answers with Angus Robertson, Westminster leader of the Scottish Nationalists, saying: “The MoD needs to explain how it is possible for a submarine to collide with another in the middle of the world’s second-largest ocean.”

Lib Dem defence spokesman Nick Harvey said: “The people of Britain, France and the rest of the world need to be reassured this can never happen again.”

The MoD was still refusing to say how much damage the £1.25billion Vanguard had suffered.

In contrast, French officials admitted the final bill for repairing Le Triomphant could top £50MILLION, with intricate missile guidance systems and navigation controls having to be replaced.

The Campaign for Nuclear Disarmament called the crash “a nightmare of the highest order”, the worst incident since Russian sub Kursk sank with 118 crew in 2000.