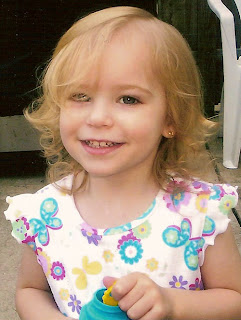 Baby Grace has a name; Riley Ann Sawyers. She also has some modicum of justice.

I hope she has rest and peace now.

Which is more than she ever had in her short life.

Baby Grace's mom guilty of murder, to do life in prison
By Harvey Rice - Houston Chronicle

GALVESTON — A jury took less than two hours Monday to convict Kimberly Dawn Trenor of capital murder in the slaying of her 2-year-old daughter, known as Baby Grace until her body was identified.

The five-man, seven-woman jury convicted Trenor after hearing five days of testimony. She'll get an automatic life sentence without parole because prosecutors did not seek the death penalty.

Trenor, 20, showed no emotion as the verdict was read convicting her of the death of Riley Ann Sawyers during an all-day disciplinary session July 25, 2007 — which included whipping with a belt, holding her head under bath water, pushing her face into a pillow and repeatedly hurling her onto a tile floor.

Trenor “will die in prison with this verdict,” said her attorney, Tommy Stickler Jr. of Alvin. She may have resigned herself to a guilty verdict long ago, he said.

“It didn't take us long because we had all the evidence,” jury foreman Randal Rothschild said. “Apparently the jury felt it was pretty cut and dried.”

As his eyes teared, Rothschild added, “It was a very emotional trial.”

Royce Clyde Zeigler II, 25, Trenor's husband and Riley's stepfather, will be tried separately for capital murder for his role in the death.

Trenor told investigators that she and Zeigler packed Riley's body in a plastic box and kept it in a storage room for as long as two months before tossing it off the railroad bridge next to the Galveston Causeway.

A fisherman discovered the body Oct. 29, 2007, on an island in West Galveston Bay, launching a nationwide search for the identity of the child investigators dubbed Baby Grace.

In closing arguments Monday, Trenor was described as a self-centered mother who killed her daughter because she stood in the way of an easy lifestyle.

“There was one thing that stood in the way of her true happiness, and that was Riley,” Galveston County Assistant District Attorney Kayla Allen told the jurors.

The deceitful, manipulating woman described by Allen and District Attorney Kurt Sistrunk on the fifth day of Trenor's trial differed starkly from the person described by Trenor's lawyers — a teenager without family support who married a man she met on the Internet who she saw as her knight in shining armor, said defense attorney Stickler.

He said Zeigler dominated her and initiated the beating that led to Riley's death. “She didn't grasp what was appropriate,” Stickler said in explaining why she didn't stop the beating.

Both the prosecution and defense rested Monday morning, and outside the presence of the jury, Trenor's husband told the judge he would not testify — refusing to answer questions on the advice of his attorney, Dee McWilliams, of Houston.. Zeigler will be tried separately for capital murder.

Stickler asked Zeigler, “Did you tell police that the whole time this was going on you were in bed sleeping?”

Galveston County District Judge David Garner ended the questioning after Zeigler invoked the right not to incriminate himself several times.

A skull fracture would have caused a reaction in seconds, such as being unable to stand, that should have made the need for medical attention obvious, he said.

The prosecution rested after Pustilnik's testimony.

Defense attorneys presented one witness, a co-worker of Zeigler's. Scott Estes said the couple appeared to be depressed and not having fun at a party they attended less than two weeks after Riley died.

In earlier testimony, another of Zeigler's co-workers testified that the couple appeared to be lighthearted at a company picnic Aug. 4, 2007. Jurors were shown photos showing Trenor smiling and playfully pulling her husband's cap over his face.