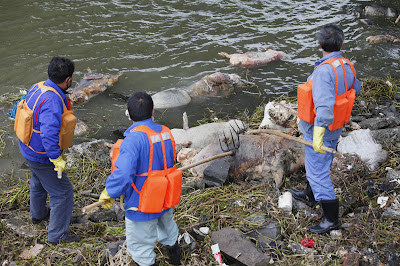 No news of this found anywhere in the U.S. media.

The Chinese authorities have failed to stop a massive flood of hog carcasses into a tributary of the Yangtze River, which has now risen to 7,545 bodies over the past week, the Shanghai Daily newspaper reported on Friday.

But the municipal authorities insisted the water was not polluted in the Huangpu River, which provides 22 percent of the drinking water for Shanghai, China's most populous city and home to 23 million people, 1,500 kilometers (900 miles) south of the Russian-Chinese border, China Daily said.

At least some of the pigs died of a disease called circovirus, which cannot be passed to humans, China Daily said, citing forensic tests performed on the dead pigs.