Deader than a nail 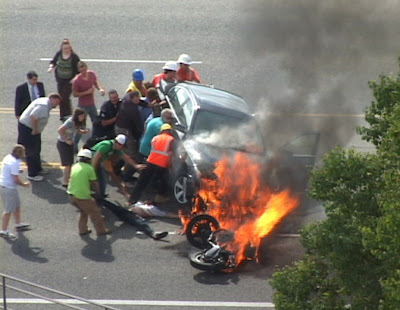 Another wrong-way driver on the highway.

The radio said they hit an 18 wheeler.

This report makes no mention of any of that.  Are there two?

But it wouldn't surprise me.

A wrong-way driver died this morning after his vehicle plunged off a bridge along Interstate 35 and caught fire.

Police got a call about 3:30 a.m. alerting them that the motorist was heading south on the freeway's northbound lanes near the Fischer Road intersection, traffic detectives said.

The motorist reportedly then lost control and the vehicle went rolling off a bridge along the freeway, catching fire when it landed below.