Clown passes into the history books 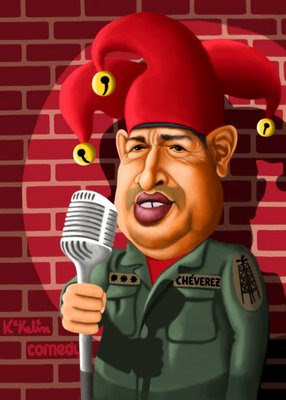 I hope Venezuela can move on safely and become a democracy once again.

CARACAS, Venezuela (AP) — President Hugo Chavez was a former paratroop commander and self-styled "subversive" who waged continual battle for his socialist ideals. He bedeviled the United States and outsmarted his rivals time and again, while using Venezuela's vast oil wealth to his political advantage.

Chavez led one coup attempt, defeated another and was re-elected three times. Almost the only adversary it seemed he couldn't beat was cancer. He died Tuesday in Caracas at age 58, two years after he was first diagnosed.

The son of schoolteachers, he rose from poverty in a dirt-floor, mud-walled house, a "humble soldier" in the battle for socialism. He fashioned himself after 19th-century independence leader Simon Bolivar and renamed his country the Bolivarian Republic of Venezuela.