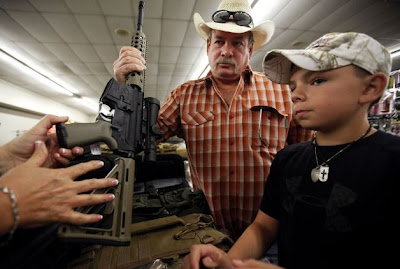 Or at least trying to.


ATF says it must act on gun buys

Federal agents in South Texas knew Harmon Chester Strunk Jr. as a “gun show groupie” who bought hundreds of weapons at bargain prices from elderly people and sold them — without a license — for a handsome profit through classified ads and at gun shows.

His customers included gang members who used the weapons in drive-bys.

Finally, agents of the Bureau of Alcohol, Tobacco, Firearms and Explosives sent a convicted felon to buy from Strunk as part of an undercover sting. Strunk, 59, an Army veteran, later got 10 years in prison for selling a weapon to a felon and selling without a license.