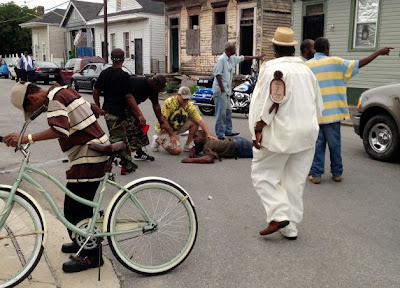 I just heard about it this morning as I've been working to get ready for oral argument on an appeal in a murder case before the Third Court of Appeals in Austin.

WTH is going on?

The shooting — described by the FBI as a flare-up of street violence — shattered the festive mood surrounding the parade that drew hundreds of people to the 7th Ward neighborhood of modest row houses not far from the French Quarter. Cell phone video taken in the aftermath of the shooting shows victims lying on the ground, blood on the pavement and others bending over to comfort them.

At least three of the victims were seriously wounded. Of the rest, many were grazed and authorities said that overall most wounds were not life threatening. No deaths were reported.