Weep for the children 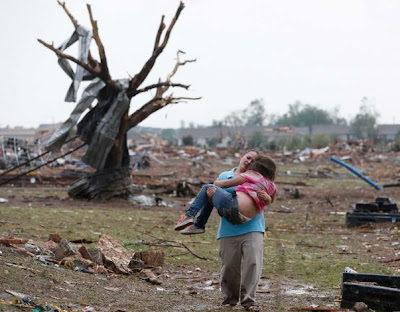 At least 20 children dead, 51 confirmed dead with pronouncements that this figure will eclipse 100+ fatalities.

We, all Americans, stand with Moore, Oklahoma and they are in our prayers.


MOORE, Okla. (AP) — The parents and guardians stood in the muddy grass outside a suburban Oklahoma City church, listening as someone with a bullhorn called out the names of children who were being dropped off — survivors of a deadly tornado that barreled through their community.

For many families, the ordeal ended in bear hugs and tears of joy as loved ones reunited. Others were left to wait in the darkness, hoping for good news while fearing the worst.

At least 20 children are among the more than 50 reported dead so far in Moore, the Oklahoma City suburb ravaged by Monday's tornado that packed winds of up to 200 mph. The twister reduced one elementary school to a heaping mound of rubble and heavily damaged another while also flattening block after block of homes. Officials said early Tuesday the death toll could rise by as many as 40.