He has a fool for a client 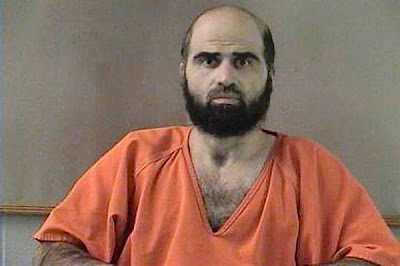 There is an old saying.

Welcome to being a fool; soon you will get your 72 virgins.

Accused Fort Hood gunman plans to represent self at trial

SAN ANTONIO (Reuters) - Accused Fort Hood gunman Major Nidal Hasan will ask a U.S. military court on Wednesday to rule he can represent himself at his trial this summer which could bring the death penalty on charges he killed 13 people in a 2009 shooting rampage.

Jury selection in Hasan's military trial at Fort Hood was delayed until next week after he asked the judge, Colonel Tara Osborn, to let him fire his lawyers and represent himself. The trial is scheduled to start July 1.

Hasan is accused of opening fire on a group of soldiers who were preparing to deploy to Iraq in November 2009 in the worst shooting rampage on a U.S. military post. In addition to the 13 people who died, 32 others were wounded.