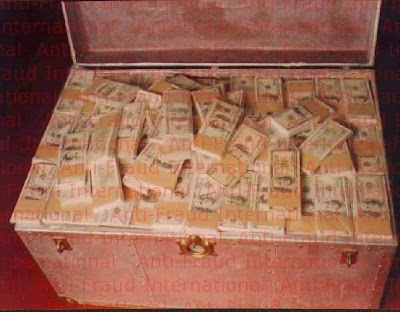 Because nothing says corruption more than boxes full of cash.

MEXICO CITY (AP) — Mexican authorities on Wednesday seized five boxes filled with cash as part of an investigation into alleged embezzlement by a former governor of southern Tabasco state, in what could become the latest test for President Enrique Pena Nieto to act against corruption.

Tabasco state prosecutor Fernando Valenzuela said bundles of 500- and 1,000-peso bills were found in an office of Jose Saiz, who was finance secretary under former Gov. Andres Granier of Pena Nieto's Institutional Revolutionary Party, known as the PRI.

Investigators are still counting the money, but a witness told them the cache contains from 90 million to 100 million pesos, Valenzuela said. That would between $7 million and $8 million.