You better call or I'll smash the phone 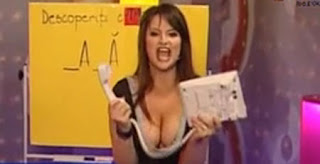 I guess the show was a bust.

My parents were from Romania and I never saw them ever get this mad.
Man! No wonder no one called. Would you want to call her after seeing that video?

A TV station has been fined £1,000 after the presenter on a live phone in quiz show threw a fit after no viewers called in.

Busty presenter Adela Lupse started screaming at the camera, smashed the phone on the ground and then jumped up and down on it before grinding the phone under her foot.

At the same time she screamed repeatedly at the camera "I want the phone to ring now. Now. Call me now."

But Romanian TV watchdog the National Audiovisual Council of Romania failed to see the funny side and fined the station £1,089 for the outburst that showed "unjustified violence".

It also ruled that the show be slapped with an X rating and only broadcast after 10pm when children are in bed.