For a good cause 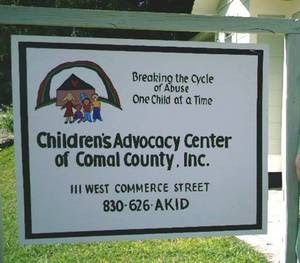 If you happen to be in New Braunfels on January 30th the Children's Advocacy Center is a great thing for you to support.

Hoping to see you there.

For those who do not know about the Children’s Advocacy Center of Comal County, it is a crucial entity in the county’s program of child abuse prevention and pursuit of child abusers. Children who are suspected of being abused or neglected are taken to this secure site and interviewed by a forensic interviewer one time.

The event is taped and can be observed by law enforcement people and child welfare people though a one-way mirror or on closed-circuit TV. That way the child is not put through a wringer by being interviewed more than once.

Child abuse is a horrible plague that seems to be hitting our section of the state badly. Numbers of children were injured and/or died in Texas during 2008 as a result of abuse.

The Knights of Columbus are giving a benefit spaghetti dinner for the CACCC on Friday, Jan. 30, at the KC Hall, 111 Landa St. It starts at 5 p.m., and it costs $5 per person eat-in or take-out.

Tickets are available at the Chamber of Commerce and The Crossing. Tickets can also be obtained by contacting a member of the Knights of Columbus.

I implore that the good citizens of Comal County support this effort being made by the Knights of Columbus to provide additional funding for the CACCC. It is a United Way Agency but needs additional funds for extraordinary expenses. For instance, every child who is brought to the center is given a stuffed toy for comfort. Other things are also provided.

New Braunfels
Posted by Sam at 7:31 AM