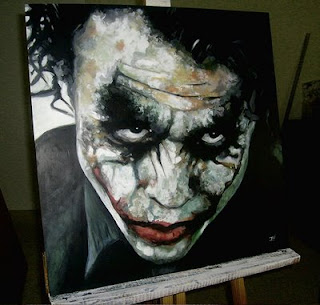 This was absolutely horrible. One of the bloodiest, cold-blooded murder rampage I can remember.

I hope he gets the justice he deserves.

My heart goes out to the families.

By Bruno Waterfield in Brussels Telegraph.co.uk

Kim De Gelder, aged 20, was arrested last Friday shortly after stabbing two babies and one of their carers to death in a gruesome attack that has stunned Belgium. He was dressed and apparently wearing make-up that gave him the appearance of the Batman character the Joker.

Investigators are examining whether the attack was timed to mark the first anniversary of the death of Heath Ledger, the actor who played the Joker in the film Batman, The Dark Knight.

It has emerged that when he was arrested, Mr De Gelder's only words were: "I have a question".

The words echo a scene in Batman: the Dark Knight when the Joker violently gatecrashes a party looking for a the fictional attorney general of Gotham City, Harvey Dent.

"I only have one question: where is Harvey Dent? I'll settle for his loved ones," says the character played by Ledger, before threatening a woman with a knife.

Patrick De Mey, the police officer who arrested Mr De Gelder, described the suspect as being in a passive and trance-like state.

"When I asked him to step off his bicycle and put his backpack on the ground he obeyed perfectly," he told the Gazet Van Antwerpen.

"But in answer to my questions, he clearly had no understanding. He continued to stare at me all the time with wide open eyes and a large grin on his face."

Mr De Gelder has been described by former schoolmates and work colleagues as a "film freak" and "movie addict".

Since his capture, he has not spoken and has gone on hunger strike.

He was reported to be on an intravenous drip in a medical facility in a prison in Bruges on Sunday night.

Ledger died of a drug overdose on Jan 22, 2008, a year and a day before Mr De Gelder is accused of carrying out the attack.

According to witness statements and police drawings, the suspect had painted his face white, blackened his eyes and had coloured his hair red.

His gruesome and bizarre garb prompted investigators to make the Joker comparison and make a link to another cult Goth film, The Crow, which inspired Ledger in his Batman role.

Belgium's Le Soir newspaper has even speculated on the significance of the fact that the name Gelder is an anagram for Ledger.

The Fabeltjesland, or Storyland, creche in the town of Dendermonde where the attack took place has been permanently closed to prevent children and parents being "constantly confronted with the buildings where the attack occurred".

Corneel Vermeir, aged six months, Leon Garcia, nine months, and their carer Marita Blindeman, 54, were killed on Friday when the assailant entered the creche and began to slash at the children and their adult supervisers.

Sources have said that when Mr De Gelder was arrested he had the addresses of three other creches on his person.

The theory that more attacks were planned is supported by evidence that the suspect was armed with three knives, an axe and a replica pistol.

Mr De Gelder will be examined by three psychiatrists before a closed court hearing on Tuesday decides if he is mentally responsible for his actions.

The young man, who lived his whole life within three miles of the family home, in the Eksaarde district of Sinaai, has emerged as a troubled loner.

Former classmates at the Roman Catholic Sint Carolus school, in the town of Sint Niklaas, described him as a fan of Goth music who could sometimes behave oddly.

He was nicknamed Satan because of his long black hair.

Mr De Gelder studied to become a chemist's assistant and successfully completed his exams in 2006.