No bun in the oven 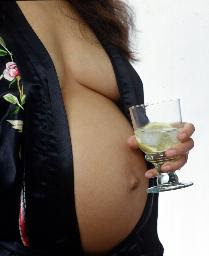 Pretty hard to fake the labor pains when you're not even pregnant.

A woman in America has discovered the hard way that faking going into labour doesn't help you escape arrest for shoplifting.
The woman was arrested in Sioux Falls, South Dakota, after police were called to a mall over a report of a woman stealing a keychain. They also found pain medication without a prescription in her purse, and so also arrested her on drug charges.
But while being arrested, the woman complained of birth pains and said she was going into labour. She was taken to a local hospital by ambulance.

But when doctors examined her at the hospital, they found that she wasn't going into labour at all. In fact, in what might have a been a slight flaw in her otherwise perfect scheme, it turned out she wasn't even pregnant.
Not only did she remain under arrest, but she's now facing a bill for the ambulance ride and hospital visit.
Posted by Sam at 6:55 AM