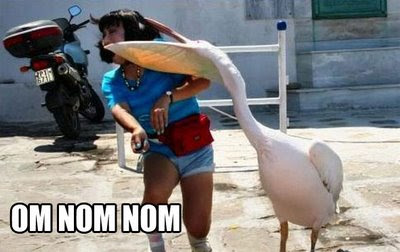 I guess he'll be eating a wee bit better for the next 60 days anyway.


A homeless man was sentenced today to 60 days in jail for choking a pelican to death because he was hungry.

The District Attorney's Office said Sergio Alvarez, 30, caught the bird near the Malibu pier on Aug. 22.

About 5:50 p.m. that day, a bystander flagged down a sheriff's deputy and said a man was choking a pelican.

When the deputy showed up, the brown pelican "flapped its wings in distress until its body went limp and died," sheriff's Lt. Robert Wiard said at the time.

Alvarez first said he found the bird dead, but later admitted he caught it and killed it because he was hungry and hadn't caught any fish, a spokeswoman for the district attorney said.

Brown pelicans are protected by state law. In a Van Nuys courtroom, Alvarez pleaded no contest to animal cruelty. Judge Jessica Silvers sentenced him to 60 days in jail and a year's probation, prosecutors said.