Nuclear Iran? Big deal, I'm gonna to be on Letterman! 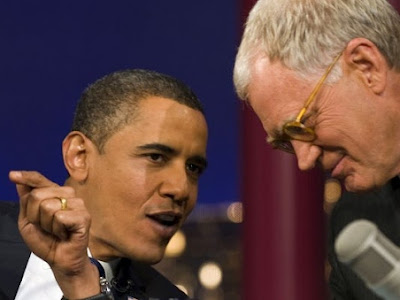 No time to visit with the Israeli Prime Minister I must go on Letterman.

Oh and send me more money for my re-election too.

The president will chat with the "Late Show" host during a trip to New York City next week, according to the National Journal. Letterman's nightly monologues mostly spare the president from satirical ribbing, saving his most cutting remarks for the Romneys ... or even former President George W. Bush.

The news comes on the same day Obama told Israeli Prime Minister Benjamin Netanyahu he couldn't meet with him due to a scheduling conflict.

The interview will be the second Obama has had with Letterman since the comic made a crude, demeaning joke about former vice presidential candidate Sarah Palin's daughter.

Letterman later apologized.
Posted by Sam at 8:08 AM